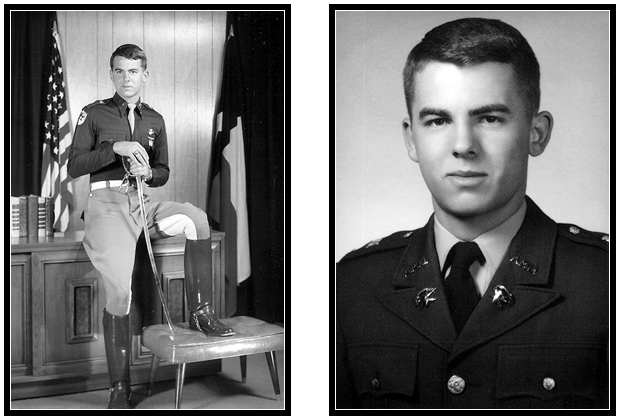 Ron his senior year at Texas A&M and in uniform ; photos courtesy of the Forrester family


1969. Ron Forrester graduates from Texas A&M, having achieved the rank of Second Lieutenant in the United States Marine Corps. A short time later, Ron weds Jana Hamilton, also of Odessa. The following year, a baby girl, given the name of Karoni Lynn, becomes part of the family.


August 1972. Ron Forrester heads to Vietnam to begin his tour of duty.


31 August 1972. Ron sends his first letter back home; he was, at the time, in the Philippines. The next day, Ron arrives at the "Rose Garden" in Nam Phong. He was assigned to the Marine All Weather Attack Squadron 533.


25 December 1972. Ron pens letter number twenty-three to his parents. He writes of the Bob Hope show that had been at the base the day before; Ron had been an escort and had met most of the entertainers. He chats about the play-off game between Dallas and the 49ers. He states how he had flown "number forty-six" on Christmas Eve, and that he shouldn't have any trouble getting a hundred missions "before this thing is over." He closes this letter, as he did all of them, with "Give Karoni a kiss for me."


26 December 1972. Hanoi informs the Nixon administration that they will resume peace negotiations; they are ready to play "Let's Make a Deal." Nixon isn't ready; he will lay it on them three more days.


27 December 1972. Capt. Ralph Jim Chipman was the pilot of an Intruder assigned a mission over North Vietnam; Ron was his co-pilot. The aircraft did not return from the mission, and last contact was made with the crew over the target area.


29 December 1972. The doorbell ominously sounds at Jana and Karoni's home, then, shortly thereafter, at the Forrester house. The two Marine officers in dress tell the tale. A Colonel Wilson carries with him a message of condolence and hope from the Commandant of the Marine Corps.

"Ron Forrester was ever so much more than name, rank, serial number and date he disappeared. He was someone's brother, twin, son, ex-husband, father, best friend. He was the finest person I've ever met." With these words, Mr. Robert Routh, one of Ron's closest friends, shared with me his memories of Ron, allowing me to learn more about a man who went MIA four and a half years before I was born. I compiled e-mail exchanges between Mr. Routh and myself to create this special remembrance. You will laugh, and you will cry, but most importantly, you will learn that Ronald Wayne Forrester really was (is) more than just a name on a black, granite wall.

What if Ron had been captured? Marine unclassified intelligence reports showing judgements based on interviews with members of Squadron 533, relating to Ron's ability to withstand and survive hardships encountered if captured, were delivered to the family years after Ron's disappearance. The unanimous consent was that Ron, being of strong character and the Christian that he is (was), could withstand a capture.

The following excerpts, taken from book chapters younger brother Larry wrote about Ron, will help you learn more about this remarkable guy, and know why it is he was - is - so highly thought upon.