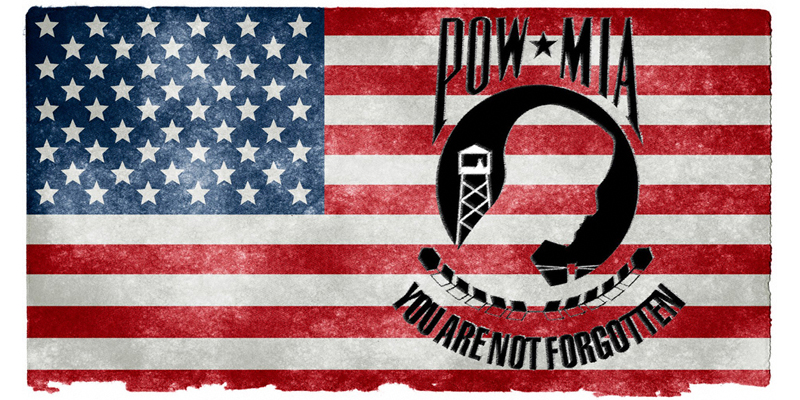 Prisoner of War. Missing in Action. Killed in Action, Body Not Recovered. Those are the categories given to those unaccounted for during war, but they are so much more than just a status, more than just names carved in black granite or etched into the bracelets we wear. They are our fathers, our sons, our brothers, our friend, and sometimes, yes, even our daughters and our sisters. We may not know them, but we should.

Some may ask "they are probably dead, what does it matter?" Ask the mother who went to her grave wondering about her son, or the child who grew up without a dad that question. They will tell you that it does, and so will I. Imagine living your life not knowing what happened to your loved one, knowing only that they were lost on foreign soil. Would you want them to be forgotten? Would you care if they were left over there? I tell you, you would want them remembered and you would want them home. I do too. That is why I created this website.

I became involved in the POW/MIA issue as a naive college student. I knew nothing about the issue, but after reading the story of a young man who was unaccounted for from the Vietnam War, I knew I had to do something. I adopted my own MIA, then another, and within a year, I had adopted seven total - one Air Force (John William Armstrong), two Army (James Arthur Harwood and Gerald Francis Kinsman), one civilian (Dr. Eleanor Ardel Vietti), one Coast Guard (Jack Columbus Rittichier), one Marine (Ronald Wayne Forrester), and one Navy (Frank Clifford Green, Jr.). I vowed that from then on that I would do what I could to keep their stories out there, to put a face to the name, to show their families that people still care. It was not easy in the beginning, and it is not always easy now, but what I can do, I will.

Please take the time to fully explore this site. Read the stories. Get involved. I want this site to make you think and take action. As of May 2021, there are still 1,584 persons still unaccounted for from the Vietnam War ... and there are still thousands more [total] unaccounted for from WWII, Korea, the Cold War, Desert Storm, Operation Iraqi Freedom, and Operation Enduring Freedom. They gave their all so you don't have to. Remember them.