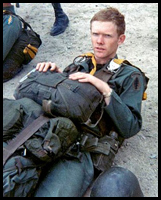 James Arthur Harwood was a Sergeant in the United States Army when he went Missing In Action in South Vietnam on 15 January 1971. Harwood was born on 10 March 1950, and his home city of record is Dallas, Texas. 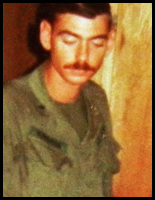 Gerald Francis Kinsman was a First Lieutenant in the United States Army when he went Missing In Action (presumed Killed) in South Vietnam on 15 January 1971. Kinsman was born on 12 June 1945, and his home city of record is Foxboro, Massachusetts.

Leading up to the Incident
Sgt. James Harwood and 1Lt. Gerald Kinsman were part of the 5th Special Forces Group Detachment B-43 based at the Special Forces camp at Chi Lang, South Vietnam. The two were assisting in the training of the Reconnaissance Platoon, 2nd Company, 1st (later the 6th) Cambodian Mobile Operations Battalion as part of Capt. Harry Purdy's instruction team.

Chi Lang was situated in a dangerous, contested border zone. Any training venture away from camp was subject to becoming a frightening battlefield between Cambodian trainees and hardened Viet Cong regulars, with predictable results, although the Special Forces had considerably more faith in the abilities of the Khmer troops than they had had in the Vietnamese CIDG unit they had formerly trained. The situation was worsened by the serious friction between Detachment B-43 and the former CIDG Vietnamese troops at the camp. The Special Forces made no secret of the fact that they felt the Khmer troops were superior to the ARVN border rangers, whom they considered hoods and thieves. The Vietnamese officer, Maj. Hoa countered by refusing to punish any Vietnamese caught stealing from the Americans.


The Incident
In January 1971, Capt. Purdy's team and the Khmer battalion-in-training conducted a field exercise at Nui Ta Bec, five miles northwest of Chi Lang. 1Lt. Gerald F. Kinsman, the tactics committee instructor, accompanied them, but was then lost. 1st Lt. James J. McCarty's shouts to him received no response. On 15 January, the three Special Forces troops were escorting the company's 24-man reconnaissance platoon, which was awaiting the arrival of the 8th Khmer Infantry Battalion, coming to replace them in the field.

The platoon was moving downhill through thick bamboo on the slope of Hill 282 (Nui Ta Bec) northwest of Chi Lang and 2 miles from the Cambodian border, after searching several large rock outcroppings of Nui Ta Bec. Sgt. Harwood was in the lead, 1 Lt. Kinsman was in the middle, and McCarty to the rear of the platoon. At this time, the platoon was moving in column formation. Suddenly the pointman came under automatic weapons fire, engaging the platoon in a firefight.

Harwood radioed 1st Lt. McCarty that he was crawling up toward the point, and was receiving direct fire from the front. Communications were then lost with Harwood, and McCarty's shouts to him met with no response. McCarty then approached Kinsman's position at the front, and saw Lt. Kinsman standing in an open area saying he had been hit in the stomach. When he reached Kinsman, McCarty found him lying on his back in a bamboo thicket. He had been shot in the stomach, just to the side of the navel with an exit wound in the back, and was lying in a large pool of blood. McCarty tried to administer aid, but his weapon was shot away, and he was wounded himself. He tried to drag the unconscious 1Lt. Kinsman from the area, but enemy troops were approaching and he had to hide. McCarty did not see Harwood.

McCarty's radioman was wounded in the leg as he frantically radioed Sgt. Stamper at the base of the hill. Maj. Leary, the Detachment B-43 commander, was overhead in an O-1 aircraft and relayed the request for immediate assistance to Maj. Hoa at Chi Lang. Hoa claimed all of his units were "busy" and no response was possible. Leary summoned a battalion from the 9th ARVN Division next, but by the time they arrived, the fighting was over. In addition to the Cambodian casualties, both Lt. Kinsman and Sgt. Harwood were missing.

McCarty was later evacuated. Harwood was classified Missing In Action, and Kinsman, because of his severe wounds was classified as Killed/Body Not Recovered. Sgt. Harwood and 1Lt. Kinsman's names can be found on Panel 05 W, Line 45.


Reports
In August 1974, a Vietnamese source reported the following information which he received second hand from another Vietnamese, "The enemy (Viet Cong) ambushed a Government of Vietnam team, killed one American and captured one American, one officer and one NCO in that vicinity. The live American was ordered to pull the body into the forest. In the forest, the American was ordered to dig a hole and bury his friend. As soon as he finished his work, a VC cadre stood beside him and fired at his head with a K .54 pistol. The two bodies were rushed into the hole, and it was filled with earth." The source also assumed that the grave site might have been in a valley.