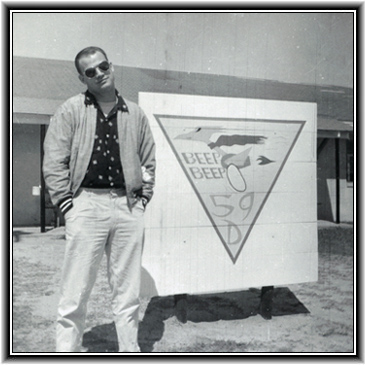 "Greater love hath no man than this, that a man lay down his life for a friend". The words from St. John 15:13 echoed true on the 9th of June, 1968, when the crew of an HH-3E, the Jolly Green 23, was killed in action. On 09 June 1968, 37 miles west of Hue, a Marine Corps fighter pilot, 1st Lt. Walter Roy Schmidt, Jr., lay on the ground with a broken arm and leg. His further misfortune was parachuting into a North Vietnamese army bivouacking area. The enemy used him for bait to lure the Jolly Green Giant rescue helicopter within killing range. Air strikes pounded the site round the survivor. The first helicopter made three attempts to reach the Marine before breaking off to refuel.

USCG Lt. Jack Columbus Rittichier dove his aircraft in for the pickup. Heavy fire forced him off. He swung around to let the gunships clean the terrain and followed them in. As he hovered over the pilot, bullets punched his aircraft, and it began to burn. He pulled away, but the Jolly Green Giant would not rise. The helicopter settled to the ground and exploded. Within 30 seconds, a ball of fire consumed the aircraft, leaving only ashes where moments ago there had been life. Four men perished, including USAF Capt. Richard Carolinus Yeend, Jr. (co-pilot), USAF SSgt. Elmer Larry Holden (flight engineer), and USAF Sgt. James Douglas Locker (Pararescueman). Schmidt still remains unaccounted for. Lt. Rittichier was one of seven Coast Guardsmen killed in Vietnam, the last of them to return home. He died for the proudest Coast Guard mission of all -- saving lives.

Lt. Rittichier was no stranger to heroism. In November of 1966, Rittichier led a rescue mission in dangerous, wintry conditions, which saved the lives of all crew members aboard the West German Motor Vessel Nordmeer, which had run aground in Thunder Bay Island Shoal, Lake Huron; he was awarded the Air Medal for his heroic actions. Within three weeks of his arrival in Vietnam [in 1968], Rittichier flew through heavy enemy fire to save four Army fliers; for this he earned the Distinguished Flying Cross. A couple of weeks later, under the faint light of illumination flares, he pulled nine men from the side of a mountain, five of whom were badly wounded.

The military never gave up on trying to locate the crash site and its crew; however, it was not until 09 November 2002 that the crash site of the Jolly Green 23 was finally located. On 17 January 2003, excavation began on the site, and on 14 February 2003, the remains of the four crew members were repatriated. Positive identification was made in August of 2003, and Jack was buried with full military honors on 06 October 2003 in a portion of Arlington National Cemetery known as Coast Guard Hill. I had the honor of being in attendance and afterwards presenting my POW bracelet to Jack's brother, Dave. The bracelet was flattened and placed into a shadow box along with the flag from Jack's coffin, Jack's medals, lieutenant bars, and a plaque. Similar shadow boxes were presented to younger brother Henry [Rittichier] and Carol (Rittichier) Wypick, Jack's widow.

Dave and Maggie as well as John and Carol wish to express their gratitude to those who have cared all these years and helped made Jack's homecoming possible. I myself want to thank them for sharing photos and stories, for allowing me to take part in Jack's homecoming, for their friendship, and for them continuing to be a part of my life all these years later. I also wish to express my gratitude to the United States Coast Guard's Historian Department for replying to my simple e-mail request for info on Lt. Rittichier with a package that contained virtually all the information contained in this section, as well as an 8*10 photo of Lt. Rittichier and Lt. Cmdr. Lonnie Mixon (whom I had the pleasure of meeting several years later). Last, but not least, my deepest appreciation to the United States Coast Guard and the United States Air Force for their continuing efforts to locate Jack, and the fine tributes they paid to him ... and to the various reporters who covered the various phases of the search for and return of Rittichier.

The 09 May 2004 episode of 'War Stories with Oliver North' covered the United States Coast Guard from its inception in 1790 until present. It was an excellent program all around, but I was particularly pleased -- and moved -- by the coverage of Jack. Jack's brother, Dave, was interviewed for the show, and there were many photos of Jack (a few I've not seen before), an audio clip of Jack recounting a rescue mission (I have all of those recordings on CD), and video clips from Jack's homecoming. Thank you, Colonel North and FoxNews, for not only recognizing Jack, but for paying tribute to all the men and women who have been a part of this wonderful military branch throughout its 200+ year history.

Special thanks to Janet at Oreilly-Fire.com for choosing 'Defining a Hero' as the May 2004 site of the month. Janet also wore a bracelet for Rittichier, and the two of us met when we attended Rittichier's funeral; we reamin friends to this day. Also, thank you to the Vietnam Veterans World Wide [online] committe for awarding Rittichier the "Honored Veterans Award".