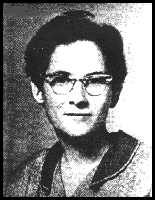 Eleanor Ardell Vietti was a civilian surgeon working at a Leprosarium in Ban Me Thuot when she was taken Prisoner of War on 30 May 1962. She was born on 05 November 1927 and her home city of record is Houston, Texas.


Background
Ardel Vietti was a twin and was born on November 5, 1927 in Ft. Worth, Texas. Her father was a geologist and provided Ardel, her sister and brother with a comfortable youth, as well as the experience of living in South America for several years. Ardel attended Rice Institute, Nyack Missionary College (one summer), and attended medical school at the University of Texas. Following her residency, she applied for foreign service with C&MA and was certified for appointment to the Ban Me Thuot Leprosarium in Vietnam.

The Christian and Missionary Alliance first arrived in South Vietnam in 1911. By the end of the Vietnam War there were over 138 missionaries throughout the country. Three weeks before Saigon fell, the church began moving its personnel out of the country. The last missionary to leave South Vietnam left on the next to last helicopter that lifted off the roof of the American Embassy on 29 April 1975.

In 1961, Ardel Vietti visited her sister who had recently joined the Washington University School of Medicine as an assistant professor of pediatrics in the hope of learning surgical procedures that would benefit her leprosy patients in Vietnam. When interviewed in 2002, Dr. Teresa Vietti recalled her sister's trip, "I remember her visiting me at the hospital and saying, 'You spend more money in one day on one patient than I do in my whole hospital.'"

The Leprosarium ministered to anyone needing medical assistance regardless of race, religion or political persuasion. At any time the hospital was capable of treating 120 inpatients and 1,200 outpatients. It was located in the dense jungle of Darlac Province, South Vietnam; 9 miles southwest of the provincial capitol of Ban Me Thuot, 5 miles south-southeast of Xa Tho Thanh and 25 miles east of the South Vietnamese/Lao border.

The Christian and Missionary Alliance, the Mennonite Central Committee and American Leprosy Missions, Inc. jointly financed this medical facility. In all, there were 56 Alliance church groups working in the areas surrounding Ban Me Thuot during 1962. In addition to the staff of nine - which included Rev. Archie Mitchell, the administrative officer, Dr. Ardel Vietti, the hospital's surgeon and Daniel A. Gerber who were captured at the same time - Archie Mitchell's wife, Bette, and their 4 children lived at the compound.


The Incident
On Wednesday, 30 May 1962 at 1945 hours, a group of 12 armed Viet Cong (CV) guerrillas entered the Leprosarium compound. Dividing into 3 groups, the VC accosted Dan Gerber, tied him up and led him to a holding area outside the compound. Another group went directly to the house of Rev. Mitchell where they promptly ordered him out of his home. The communists immediately tied his arms behind him before leading him away to join Mr. Gerber. The last group crossed over to Dr. Vietti's home, ordered her outside and escorted her to the holding area.

The VC also quickly rounded up the rest of the staff and sternly lectured them on their betrayal of the Vietnamese people. Further, they assured the staff that each of them deserved an immediate and painful death. While the Communists terrorized the nurses and other missionaries, including the children, the VC did not harm or molest them. After completing their lecture, the VC ransacked all the buildings for anything they could use - linens, medicines, clothing and surgical instruments - then packed the supplies into the hospital's truck.

Originally the VC planned to take Betty Mitchell and the couple's children along with the other three. After convincing the VC that the missionaries' would fully cooperate with them if only they would leave Mrs. Mitchell and the children behind, the VC forced Dr. Vietti, Rev. Mitchell and Mr. Gerber into the back of the truck under armed guard. At roughly 2200 hours, the communists departed the hospital compound with their prisoners and supplies. At the time US intelligence believed the three were abducted for use in a VC hospital.

When Ardel Vietti, Archie Mitchell and Dan Gerber were captured, the US pledged all of its resources in order to see that everything possible was done to achieve their safe rescue or release. Both American and South Vietnamese military intelligence agencies immediately discovered their probable detention location. Likewise, they also confirmed that communist forces used these medical personnel's expertise to treat their own sick and wounded as they moved from one location to another. Unfortunately, while our intelligence successfully tracked Dr. Vietti, Rev. Mitchell and Mr. Gerber's movements, they were never able to mount a rescue mission due the heavy and continuous enemy presence in and around the area of captivity.

At the same time the military was actively tracking Ardel Vietti, Archie Mitchell and Dan Gerber; missionary officials were attempting to negotiate for their release. By 1969, negotiations between the Christian and Missionary Alliance and some North Vietnamese soldiers seemed close to gaining the missionaries' release. However, the negotiations collapsed and never could be reconstituted.

Throughout the years there have been a continuous flow of reports and sightings of these civilian missionaries, as well as American military personnel, under the control of VC and NVA cadre during and after the war. In fact, since the end of the Vietnam War there have been well over 21,000 reports of American prisoners, missing and otherwise unaccounted for received by our government. Many of these reports document LIVE America Prisoners of War remaining captive throughout Southeast Asia TODAY.

Missionaries, like military personnel, were called upon to operate in many dangerous circumstances, and they were prepared to lay down their lives or be captured, if necessary, in order to carry out their humanitarian work. It probably never occurred to them that they could be abandoned in the same manner as American military men by their country.


Sources
All Biographical and loss information on Vietnam Era POW/MIA's provided by Operation Just Cause have been supplied by Chuck and Mary Schantag of POW/NET. Please check with POW/NET regularly for updates. Additional info (if source is not mentioned above) was obtained from Task Force Omega, Inc website.