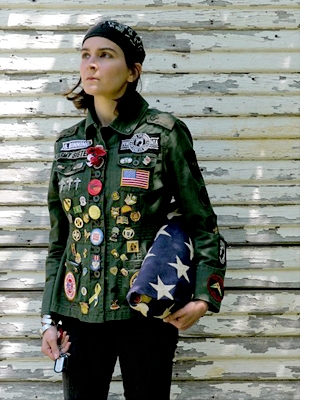 I am Stacey, a native Texan and proud American. I am a friend to veterans, a voice for those who have yet to return. I live to honor those who made it back, and remember those who did not. I am an adopted member of the local Vietnam Veterans of America chapter, a life member of the Associates of Vietnam Veterans of America, and an honorary member of the United States Coast Guard. I am the proud granddaughter of three World War II veterans. Furthermore, I am the daughter-in-law, cousin, niece, aunt, and sister of numerous other veterans, including a brother who served in Afghanistan and a nephew who served two tours in Iraq.

I became involved in the POW/MIA issue in January 1998. I was a junior at the University of North Texas, and six months away from my twenty-first birthday. Surfing the internet one day, I happened upon a web page that paid tribute to a man who was still Missing in Action from the Vietnam War. Feeling heartbroken because this person was only nineteen when he was lost, and wanting to learn more, I decided to follow a link and adopt my own MIA. Little did I know what a pivotal point that would be in my life.

Within a year, I had adopted six more people unaccounted for from the Vietnam War and began this site; in 2013, I adopted my eighth MIA. Each of my adopted POW/MIAs were adopted for a reason: Harwood, because he was the first name given to me; Kinsman, because he was lost in the same incident as Harwood; Vietti, because she was the lone female POW; Green, Forrester, Armstrong, and Rittichier because they represented the remains branches of the military. When I adopted my seventh MIA, I felt complete. They were my special heroes, the men and woman whose stories I would commit to heart so that I could tell others about them. Later on, I dedicated part of this site to all Texans unaccounted for from both the Korean and Vietnam Wars, and I would recollect bits of information about some of them when I would hear their names. I felt connected to them as well, but not on the same level as my original seven adoptees. However, after contacting the daughter of another MIA, we became fast friends. I wanted to do what I could to help honor her father, so, fifteen years after I adopted my first MIA, I decided to adopt her father as well.

This site has evolved over the years, and so has my involvement. I have gone from shaking my head in frustration at people who did not want to look at this issue as a major issue to speaking to those who do at my city's annual POW/MIA vigil. I have jumped for joy when I learned that another MIA is home to weeping with the family as I attend a former MIA's funeral (five so far: USCG Lt. Jack Columbus Rittichier - Vietnam; USAF Chief MSgt. Luther Lee Rose - Vietnam; USAF Major Arthur Dale Baker - Vietnam; USAF Colonel James Wimberley Lewis - Vietnam; and 2LT. Raymond Arthur Cooley - World War II).

My life has changed throughout the years as well. I moved to a different part of Texas in 2001, and became involved with the local Vietnam Veterans of America chapter. Through them I have been able to reach out to so many people. I have volunteered at The Moving Wall twice - once in my new hometown in 2002 and again in Branson during Operation Homecoming USA in 2005. I read names of some of the Texans lost in the Vietnam War at the groundbreaking ceremonies for the Texas Capitol Vietnam Monument and attended the dedication the following year.

So much has changed in the twenty years since I first became involved, but one thing has remained the same: my firm belief in the quote that I end all my speeches with, which is this -- "A man is not dead until he is forgotten." As long as I am able, I will do what I can do keep alive the memories of our POW/MIAs. They deserve nothing less.