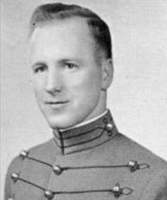 John William Armstrong was a Lt. Col. in the United States Air Force when he went Missing in Action in Laos on 09 November 1967. He was born on 05 December 1926, and his home city of record is Dallas, Texas. I have worn a bracelet in his honor since 2003.

The Incident
Then Lt. Col. John W. Armstrong was the Commander of the 480th Tactical Fighter Squadron based at DaNang Airbase, South Vietnam. 1Lt. Lance Peter Sijan was the pilot and LtCol. John William Armstrong the bombardier/navigator of an F4C Phantom fighter/bomber sent on a mission over Laos on 9 November 1967. Sijan and Armstrong were flying low over the "Ho Chi Minh Trail" when, at approximately 2100, the aircraft was hit by a surface-to-air missile (SAM) and crashed. The two went down near the famed Mu Gia Pass, a pass in the mountainous border region of Laos and Vietnam. It was not until nearly six years later that it was learned what happened to Sijan and Armstrong. They were classified Missing in Action. [note : Armstrong's son states that "John Armstrong was the pilot/squadron commander and Lance Sijan was the back-seater (WSO)." A correction by another person states that "The aircraft was brought down by defective fuses on the bombs that they was carrying ..." ]


Personal Information
Lance Peter Sijan graduated from the U.S. Air Force Academy in 1965. He was promoted to the rank of Captain during his captivity, and was awarded the Congressional Medal for his extraordinary heroism during his evasion and captivity. Sijan became legendary in his escape attempts and endurance, even to his Vietnamese captors.

In the early 1980's, LtCol. James "Bo" Gritz conducted a number of missions into Laos attempting to obtain positive proof of live POWs there, or better, to secure the release of at least one POW. Although Gritz failed to free any POWs, he returned with a wealth of information on Americans. One thing Gritz recovered was a U.S. Air Force Academy ring for the class of 1965, inscribed with the name "Lance Peter Sijan." The ring was returned to Sijan's family in Wisconsin.

John William Armstrong graduated from West Point in 1949. He was promoted to the rank of Colonel during the period he was maintained Missing in Action. The U.S. believes that the Lao or the Vietnamese can account for him, alive or dead.

In 1977, a Pathet Lao defector, who claimed to have been a prison camp guard, stated he had been guarding several Americans. According to his report, one was named "Armstrong." There are only two Armstrongs listed as MIA. There is little question that the other Armstrong died at the time of his crash. The Defense Intelligence Agency places no validity in this report.


From the Smith 324 Compelling Cases - Part 2
On 9 November 1967, Lieutenant Colonel Armstrong and Lieutenant Lance P. Sijan were the crew on board a camouflaged F-4C, one in a flight of two aircraft on a combat operation over Khammouane Province. On their second pass over the target area, a ford in the area of Ban Laboy, their aircraft went through an estimated 60 rounds of 37mm anti aircraft barrage fire. Their aircraft burst into flames, climbed to approximately 9000 feet and then began to descend on a 15-20 second controlled flight before it crashed approximately one kilometer from Route 912. There was burning throughout the night from the wreckage which landed in a sparsely populated karst area. There were no chute or beepers seen but something appeared to fall from the aircraft. On 11 November 1967, SAR forces established contact with Lieutenant Sijan who was alive on the ground, had a broken leg, and had not had any contact with Colonel Armstrong. Lieutenant Sijan was never rescued but successfully evaded for 46 days before being captured by People's Army of Vietnam forces. He was taken to Hanoi where he died in captivity on 22 January 1968. While in captivity he related his belief that one of their bombs had exploded immediately upon release and this was the reason for their crash. Also, he believed Colonel Armstrong was killed prior to ejection from the explosion of his aircraft's bomb. Lieutenant Sijan was listed as having died in captivity and his remains were repatriated in March 1974.

Colonel Armstrong was not accounted for during Operation Homecoming and returning U.S. POWs had no information on his precise fate. In June 1974 he was declared dead/body not recovered, based on a presumptive finding of death.

In February 1978, the Joint Casualty Resolution Center in Thailand received a report from a refugee in Thailand about four U.S. POWs captured in Sam Neua, Laos, and last seen alive in 1977. The source supplied Colonel Armstrong's name and stated he was one of the POWs. The individual was removed from the refugee camp by Thai authorities and JCRC was unable to reestablish contact with the source.

In October 1983, a U.S. citizen reported he had obtained personal effects of Lieutenant Sijan from a former Lao Army colonel operating with a self-claimed Lao resistance force from the area of Nakhon Phanom, Thailand. In November 1984 another U.S. citizen and POW/MIA hunter provided the U.S. government with information about case 0833 and the recovery of a personal ring which was allegedly passed to the National Security Council officer responsible for the POW/MIA issue. In November 1991, U.S. investigators in Vietnam obtained access to an 84 page listing of U.S. aircraft losses in People's Army Military Region 4. Page 48 contained an aircraft shoot down correlating to this incident.