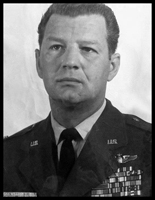 
William Young Duggan was a Major in the United States Air Force when he went Missing in Action in Laos on 31 December 1971. He was born on 07 May 1935, and his home city of record is Leander, Texas.

William Young Duggan was born on May 7, 1935 in Houston, Texas. As both of his parents passed early in his life, he was raised by his Grandmother, Lottie Hooks Dies, on the Dies Family Ranch near Jollyville and Leander Texas. He grew up riding horses, rooting for the Texas Longhorns, and working on fast cars. He developed a love of flying and a desire to serve his country which culminated in his joining the Air Force and becoming a fighter pilot. After receiving his pilots wings, he married Margaret "Peggie" Ann Davidson and had two children, his daughter Charlotte Ann, and his son, Robert Scott.

On his first tour of duty in Southeast Asia, he flew A1E's with the Air Commandos out of Bein Hoa flying close air support missions. During these 265 combat missions, he received the "Order of the Able Aeronaut" award for successfully making a dead stick landing in an A1E, and saving an aircraft. On another Close Air support mission, he was forced to ditch his A1E in the Gulf. He swam ashore and buried his body in the sand pulling grass over his face. The Viet Cong came within 2 feet of him but never found him. His children always knew that "Daddy" was the best Hide & Seek player ever to play the game.

On his second tour of duty in Southeast Asia, he flew F-4's as a senior pilot with the Night Owl Squadron of the Wolf Pack from UBON Airbase in Thailand. During these 192 combat missions, he flew "Fast FAC" or Fast Forward Air Controller missions. His job was to fly solo night time missions along the Ho Chi Mien Trail and destroy enemy Anti-Air Defenses and harass enemy supply lines.

During these tours of Duty he amassed 457 combat missions which at the time of his loss was the highest number flown by a pilot to that date. Other Air force duty assignments included stints with the Thunderbird squadron, instructor pilot, and weapons development.

During his career he earned numerous medals for his service, gallantry, and airmanship. They include the Silver Star, Bronze Star with V for Valor (oak leaf clusters), Distinguished Flying Crosses, Air Medals, Purple Hearts, and numerous other decorations.

On the night of December 31, 1971, after mid-air refueling, he was piloting his F4 over Laos and was shot down. To this date, the aircraft has never been found, and neither the remains of Major William Duggan (Pilot and Aircraft Commander) or Captain Frederick Sutter (Navigator) have been recovered.

In May 2013, I made the decision to adopt Major Duggan as my eighth MIA, after befriending his daughter. The biography above was provided by his family; you can read his incident of loss bio here.