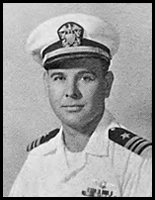 Frank Clifford Green, Jr., was a Commander the United States Navy when he went Missing In Action in North Vietnam on 10 July 1972. Green was born on 05 June 1935, and his home city of record is Waskom, Texas. Green's remains were recovered in 2008 and identified in 2010.

The Incident
Commander Frank Clifford Green, Jr. was a pilot assigned to Attack Squadron 212 on board the USS HANCOCK. On 10 July 1972, CDR Green was launched in his A4F Skyhawk aircraft to lead a night armed reconnaissance mission over North Vietnam.

Green and his wingman had completed the armed reconnaissance of an assigned road segment and proceeded on their secondary mission to locate and destroy any targets of opportunity they might find. They sighted vehicle lights some distance south of their position and flew in that direction in order to make an unlighted bomb attack. Shortly after the attack, the wingman observed a small flash in the general target area immediately followed by a large, fuel type, secondary explosion on the ground. Not hearing an acknowledgement that CDR Green was off the target or a reply to his comments about the explosion, the wingman suspected that the explosion might be CDR Green's aircraft.

Search and rescue efforts were initiated immediately, but attempts made to contact CDR Green met with negative results. The crash site was located, and shortly after, the crash site had been camouflaged.* It was believed that Green would not have camouflaged the site before he could be rescued. Since it was not known if CDR Green were killed in the crash of his aircraft or survived to be captured, he was placed in a casualty status of Missing in Action. The area in which he crashed (about 5 miles southwest of the city of Ninh Binh in Ninh Binh Province) was near a heavily populated area, so there is every reason to believe the North Vietnamese could account for what happened to CDR Frank C. Green. *note : a letter sent to me by the Department of Defense states that the crash site could not have been camouflaged.


From the Smith 324 Compelling Cases - Part 4
On 10 July 1972, an A-4F piloted by Commander Green was the lead aircraft in a flight of two on an armed reconnaissance mission over Thanh Hoa Province. Commander Green "rolled in on his assigned target" and his wingman saw his aircraft crash into the ground and erupt into a large fire. Diving under overhead flare illumination, the wingman located the crash site with a large sustained fire on the ground. There was no evidence that anyone had survived the crash. Commander Green was declared missing in action.

In November 1985, Vietnam provided the U.S. side with information on Commander Green but did not provide any remains.